What is Cannabigerol (CBG)? | What to Know

CBD Nerd CBD News Comments Off on What is Cannabigerol (CBG)? | What to Know 193 Views

Cannabigerol or CBG is only one of the hundreds of cannabinoids present in cannabis plants. While not known as cannabidiol (CBD) and tetrahydrocannabinol (THC), CBG has gained attention in recent years. Due to low levels in most cannabis strains, CBG is considered a minor cannabinoid. Luckily, this doesn’t deter scientists from exploring more about it.

The biggest concern, or so it seems, about most cannabinoids nowadays is their side effects when taken regularly. For those looking to utilize cannabis’ health benefits without the intoxicating side effects, you may be thrilled to hear that CBG, much like CBD, is not a psychoactive cannabinoid.

Not only that, but cannabigerol also boasts its list of health benefits, making it a popular choice in the health community nowadays. Read on to know more about the cannabinoid that is fast gaining the attention of medical experts and cannabis connoisseurs all over the world.

Is CBG The New CBD?

An important thing to note about cannabigerol is that experts sometimes consider CBG as the “mother cannabinoid.” It is a precursor in producing other compounds from the cannabis plant material. This happens when CBGA or cannabigerolic acid breaks down into the form of CBG, CBC (cannabichromene), THC, and CBD when it undergoes a heating process called decarboxylation.

As CBGA converts enzymes, the synthesis or decarboxylation method could also affect whether the acid will mostly form THCA or CBDA. If THC enzymes are more dominant in the strain, less CBD and CBG are formed and vice versa for CBD-dominant enzymes. Obtaining higher levels of CBG for a product requires a whole process with genetic mutation and manipulation.

Many also consider cannabigerol as the biggest rival to CBD in popularity and even possible health benefits. While it is the precursor for forming cannabidiol, the two cannabinoids vary in many aspects. For one, CBG traces are usually less than 1% in most cannabis strains. CBD, on the other hand, is highly potent and dominant in hemp plants.

However, the two are also similar in that both are non-intoxicating compounds. Unlike THC, CBG and CBD do not make users feel the infamous “weed high” that typically compromises motor and focus skills. Both compounds also interact with the body’s natural cannabinoid receptors called CB1 and CB2 receptors located in the endocannabinoid system or ECS.

What are the Benefits of CBG? 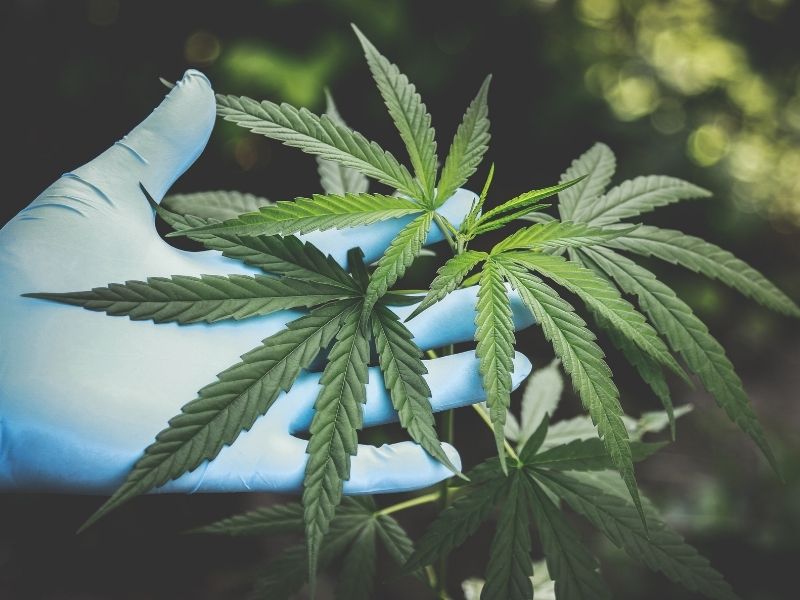 While considerably lower in trace amounts than other cannabinoids, cannabigerol’s possible health benefits have caught the attention of health enthusiasts and medical experts alike. Much like CBD, experts have found that CBG has notable anti-inflammatory properties that could help treat varying degrees of physiological and even mental complications.

Some medical conditions that could benefit from CBG treatment are glaucoma, inflammatory bowel disease, multiple sclerosis, Huntington’s disease, and curbing the spread of cancer cells from certain types like colon cancer. Majority of these conditions manifest degrees of pain, inflammation, and general discomfort to the patient that could be alleviated using CBG.

There is also scientific evidence that points to CBG as an effective antibacterial agent. This is not surprising, considering cannabis topicals have been used for hundreds of years to treat skin allergies, infections, and other similar conditions. Admittedly, more research on this particular cannabinoid is needed to understand its many potential health benefits fully.

Is CBG Better than CBD?

When it comes to comparing cannabinoids, the outcome usually depends on which one has more available research. CBD is much more popular than CBG. It has substantially more clinical trials and scientific data to back its supposed health benefits. However, CBG is also trying to catch up as more experts are looking to study it further.

In any case, both cannabinoids have been found to have therapeutic potential. Cannabigerol and cannabidiol have anti-inflammatory and antibacterial properties that make them effective in treating varying health problems such as chronic pain, skin problems, and even managing anxiety disorders. CBD just so happens to have the advantage of a wider product range.

CBG, on the other hand, is much more difficult to produce. This is mainly because only a very small amount of CBG content is traceable in most cannabis strains. Considering this, the price of CBD could be lower than CBG products on the market right now. The cannabinoid is most prevalent in young cannabis plants at around 6 to 8 weeks into the flowering cycle, so it must be harvested within this time frame.

While not entirely new in its discovery, with its history of successful isolation in the 1960s, the reason for cannabigerol’s lag behind in popularity is mostly because of its scarcity and the high expense of production. As science and technology advances, more cannabis farmers and experts are investing slowly. However, they surely introduce the compound to the public.

How does CBG Make You Feel? 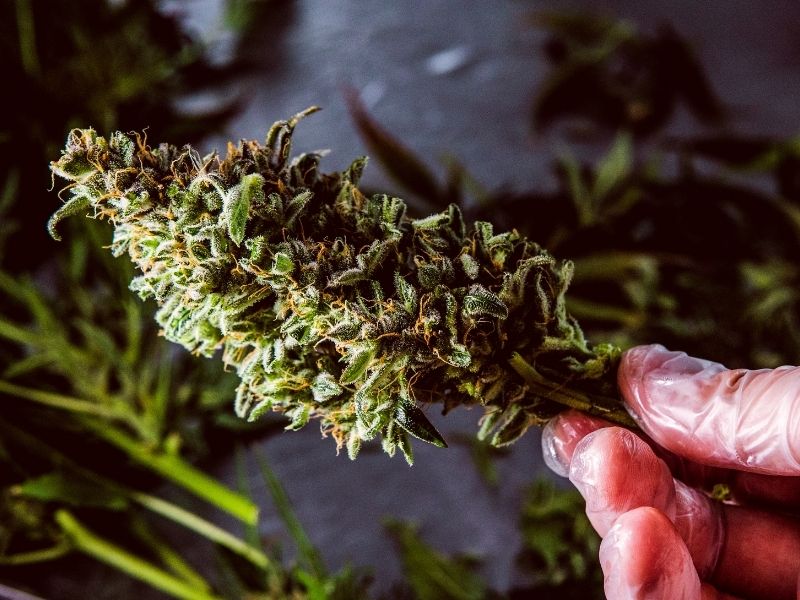 Despite the long list of potential benefits of this trending cannabinoid, the general public consensus on all things unknown is to question its side effects on the human body. Does cannabigerol also produce the same side effects as smoking a rolled joint of marijuana? The quick answer to this is no. The compound is completely non-intoxicating, even as an isolate.

However, every individual has a different reaction to cannabinoids, especially when introduced into the system. Some first-time users have reported mild side effects such as relaxed muscles, slight dizziness, and lightheadedness. These typically last for a couple of hours up to a day as the body adjusts to a foreign substance.

Some of these side effects are typical to users taking any cannabinoid, including what CBD feels like. The relaxing and calming properties may even help you rest easier and longer. If you are worried about drowsiness, CBG, in essence, is not a sleeping aid, so it will not force sleep to unsuspecting users.

As a byproduct of organic plant material, cannabinoids are organic, healthy, and considered generally safe, except THC. However, the Food and Drug Administration is yet to approve any CBG supplement in the market. Due diligence as a consumer, it is your due diligence to double and triple check the quality of cannabinoid supplements. Especially when you intend to buy.

It is also important to remember that before trying any cannabinoid, cannabigerol, or otherwise, consult with an attending physician first. Pregnant persons or those with medical conditions may have adverse reactions to the compound.

If you’re curious about trying CBG, it might be easier to find high-quality full-spectrum CBD oils, which should contain some CBG. Just make sure to check in with your healthcare provider first if you take any medications or have an underlying health condition.

Can you Take CBD and CBG Together?

CBG, as a precursor to CBD, means that they come from the same enzyme that has been broken down into differing forms. This means that, technically, you can always take CBG and CBD together. But this isn’t entirely accurate, because as mentioned before, the acidic compound CBGA needs to undergo decarboxylation to make CBD.

Most cannabis and hemp products sold openly to the public are labeled THC-free, with a minimal 0.3% THC or THC-dominant. Other cannabinoids usually take a backseat to the most popular one out there. Nowadays, however, CBD products are also on the rise. Full-spectrum CBD contains a minimal amount of THC, while broad-spectrum CBD contains other cannabinoids except for tetrahydrocannabinol. Some of these broad spectrums include CBG.

So the short answer to whether CBD and CBG can be taken together is a resounding yes. Both are often profiled in many hemp products that list varying cannabinoids, terpenes, and flavonoids. Scientists are also looking into the results of mixing these two compounds. This is whether their respective properties increase or merely stabilize when combined.

What are the effects of Cannabigerol extract?

What is Cannabigerol oil used for?

CBG can be of use to treat almost the same conditions as CBD is of use to aid in. Examples of these are treatments for chronic pain, anxiety and mood disorders, sleeping problems, nausea, vomiting, and skin problems. Some clinical trials have also started using them for more long-term medical conditions.

Why is CBG so expensive?

Cannabigerol can be expensive to produce because of its scarcity in most cannabis strains. The process involved in isolating the cannabinoid also requires high-standard equipment, including genetic manipulations. There is also only a certain time window to best harvest CBD from young cannabis plants.

How do you consume Cannabigerol?

Finding CBG products can be a difficult endeavor. Not all dispensaries cater to them because of their lack of demand from the public. However, there are brands out there that make CBG-based products. If you find it hard to find, try looking for full-spectrum or broad CBD oils that contain CBG first.