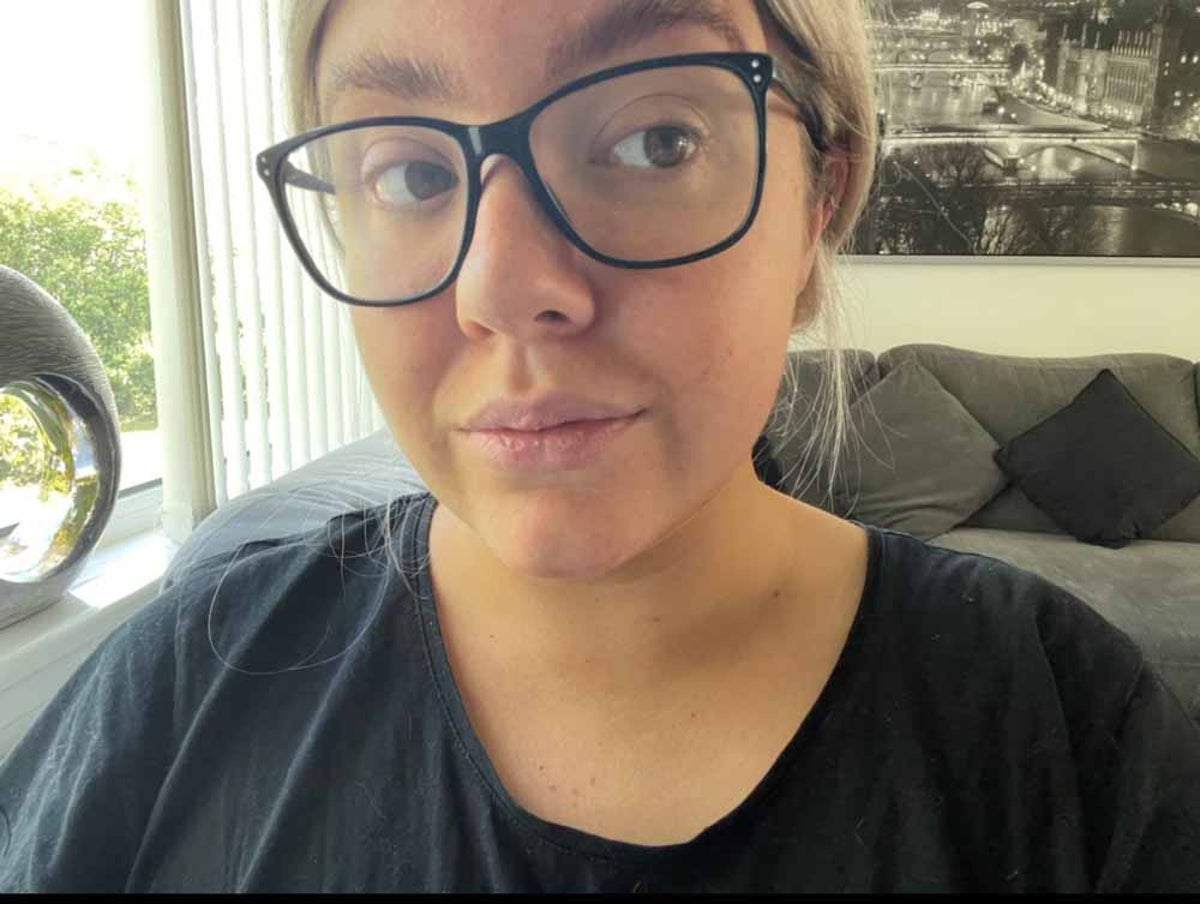 A nurse plagued by acne breakouts for seven years which badly affected her self-confidence has finally cured her skin problem by using an £18 fake tan.

Emma Young, 23, a paediatric nurse, was sceptical when she read reviews saying a self tanner cleared spotty skin, because she had already tried treating her sore red acne spots with antibiotics and steroid creams and fake tan normally caused breakouts across her cheeks .

Emma, who lives in Glasgow with her boyfriend, Bradley, 24, a joiner, said: “I didn’t expect it to work for me because I had tried all the skincare products under the sun and nothing would help my sore red skin.”

Affected by acne since her early teens, Emma had tried everything to clear her complexion.

She said: “My skin got so bad I ended up going to the doctors aged 14 and was put on antibiotics and a steroid cream over the next five years, but they made my skin dry and didn’t do much to get rid of the acne.

“And I never used to tan my face with self-tanner, as it would always cause breakouts, which put me off self-tanning.”

But Emma, who would never leave the house without wearing heavy make up because she felt so self-conscious and did not want anyone, not even her boyfriend, to see her barefaced, was desperate enough to try the fake tan anyway in April 2020.

She said: “I thought I’d give it a go because I’d tried everything to fix the problem and at that point I had nothing to lose.”

The results took her by surprise.

She said: “I was really shocked that after one time using it, my skin was already clearer.

“Within a few uses, I started to see so many improvements and, after a few days, my face was completely clear of spots.”

Now she uses it all the time, even though it means her face is always tanned.

“I wouldn’t be without it,” she said.

While she was not the only child with problem skin in her early teens, she says her spots were worse than those of her friends.

She said: “It’s normal for kids at that age to get acne, but mine was so bad.

“While my friends just had a few spots here and there, my skin was red and the spots were all over my face.”

She added: “It never cleared up and was really severe, to the point where my mum booked me a doctor’s appointment.”

Prescribed various skin treatments by her doctor, Emma says her condition did not improve.

She said: “There were certain creams that seemed to help the problem but it would only last a couple of days.

“I was put on steroid creams from 14 years old, which was really harsh on my skin and my face was so dry because of it.”

She added: “The steroid cream and antibiotics temporarily reduced the amount of acne I had, but the cream used to burn my face and leave me with blotches, as it was so strong.”

At 19, Emma decided to stop using the steroid cream and antibiotics she had been prescribed.

She said: “I stopped taking the medication from the doctors because it was so harsh on my skin and went back to trying new and more natural skincare products.”

But again nothing was helping.

She said: “It really started to affect my confidence.”

Emma admits she would not leave the house without full make up on, which she believes added to her acne problem.

She added: “It was a vicious cycle. I thought the make up would help to cover up, but my acne was so bad that you could see my bumpy skin underneath my foundation.

“I was trying a lot of products but nothing was helping and my skin was very sensitive.”

She continued: “It was dry and sore and almost scabbing.

“It looked so red people would always say to me it looked sore.”

Emma’s skin also made her feel self-conscious around her boyfriend, Bradley, who she has now been with for eight years, after meeting him aged 15.

“I used to worry about not having make up on around him so much,” she said.

She continued: “I worried I would be judged for my skin.

“I didn’t let him see me without make up at first.

“Eventually I did, but it definitely made me self-conscious.”

Then, in 2020, when she was 21 and in second year at Glasgow Caledonian University studying nursing, Emma heard friends talking about utan x Jamie Genevieve CBD Tanning Water.

Curious, she started to check out online reviews, saying: “I wasn’t sure if the product would work but I decided to give it a try.

“I couldn’t believe it when it worked.  I feel free for the first time in seven years.”

And it was not just Emma who noticed.

She said: “Even family members have said what a difference there is with my skin.”

She added: “A few of my friends have commented that I seem so much happier and brighter. Even Bradley has remarked on the change.

“He’s been so supportive of me through everything and I think he’s just glad that I’m happier now.”

Emma still gets the occasional spot, but says her skin is now much more manageable.

She said: “Now for my routine I use my tanning water and moisturise every night and it’s made a huge difference.”

She said: “I apply it daily which does mean my face looks more tanned than it used to as it is a self-tanner, but I don’t mind.

“Sometimes I do my body and face, but a lot of the time I just do my face and don’t bother with anywhere else. It gives my face a nice glow.

“My skin is clear which is something I never thought I’d say.”

But Emma says the biggest difference has been to her confidence.

She said: “I don’t shy away from social events and there are often days in the week where I don’t wear any make up to work which never would have happened before.

“Wearing masks at work would dry my skin out and definitely make it worse but now, even in masks, my skin is so much better.

“I do feel better around the patients too – I don’t feel like I need to constantly hide my skin anymore.”

She continued: “I rave to all my friends, saying that the fake tan is the best thing I’ve ever used.

“The most important thing is that I now feel so much better about myself.”

Previous Where is the Most Expensive Gram of Cannabis in the World?
Next Christmas Gift Guide: Top 5 Gifts For Him